How many of these buildings do you recognize?

During the mid-1870s, John Augustus Dempwolf started one of the most successful architectural practices in south central Pennsylvania. Joined by his brother Reinhardt and nephew Frederick, the firm of J.A. Dempwolf designed hundreds of buildings in ten states. Many of York’s architects got their start with this firm including; Martin Bowers, John B. Hamme, Edward Thomas Keyworth, Edward Leber, Harry. R. Lenker, Arthur Rosser,  J. B. Rosser, Robert P. Stair, Harry  E. Yessler. They designed public buildings such as banks, schools and factories, business premises, and churches as well as residences.  Within walking distance of Continental Square one can view numerous surviving examples of their work. A searchable database of the surviving original drawing is found on the York County Heritage Trust website. 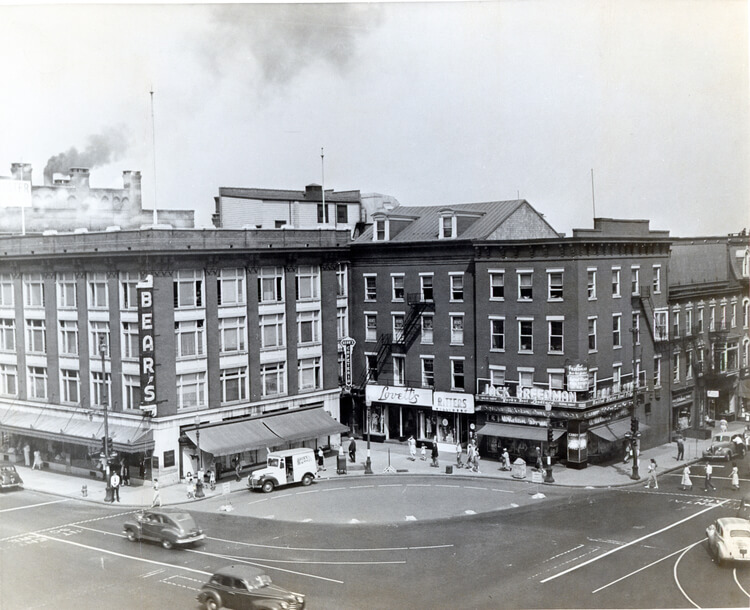 Dempwolf was hired to design an addition to the existing 1888 structure in 1911 but the end result was essentially a new structure utilizing a few of the existing walls.  This commercial style building with decorative Italianate brackets was one of the anchor stores in downtown York until the 1970s.

Max Grumbacher opened a dry goods store in 1898 at 36 West Market Street. In response to his growing business, a new building was designed at 100 West Market Street. Known for its “Tea Room” that could hold 250 people, it also had one of York’s first “moving stairway”. Today it is houses the York County Human Services Center. 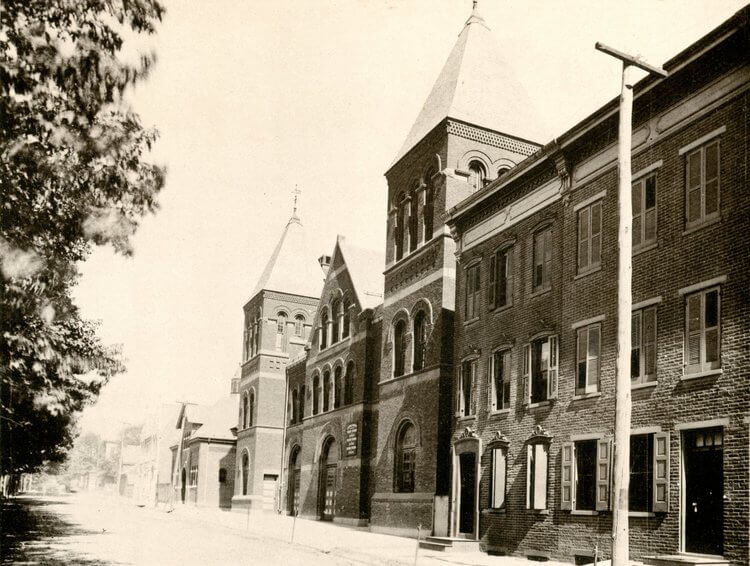 Located on North Beaver Street and West Philadelphia Streets at Cherry Lane, this commercial red-brown brick and brownstone structure cost approximately $50,000 to complete. Today it stands as the heartbeat of the Arts district. 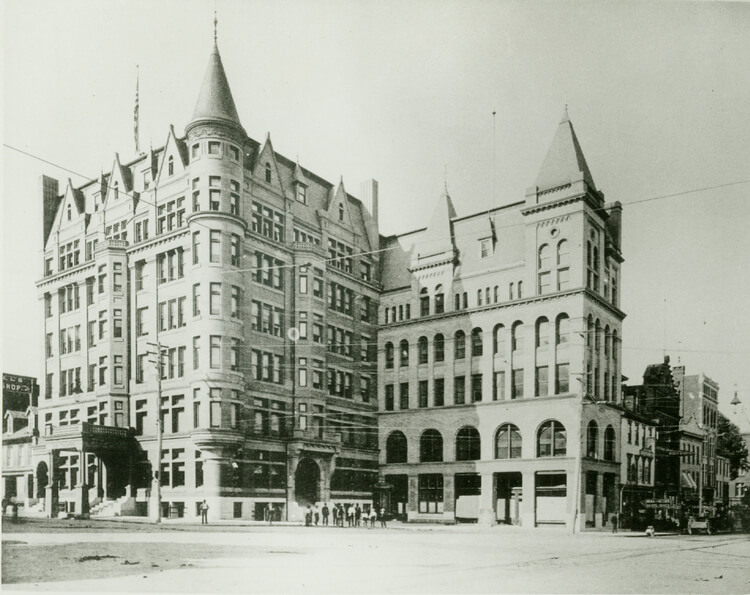 With a capacity of 75 guest rooms when it opened, the 1908 addition expanded its capacity to 200 rooms. A fire in 1947 destroyed part of the roof of this Chateauesque style hotel with a dining room found on the top floor. The adjoining Rupp Building is Victorian Romanesque in style incorporating golden brick into its façade. 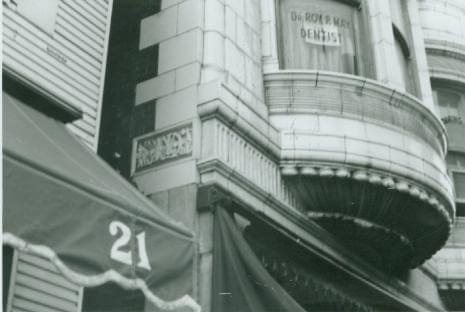 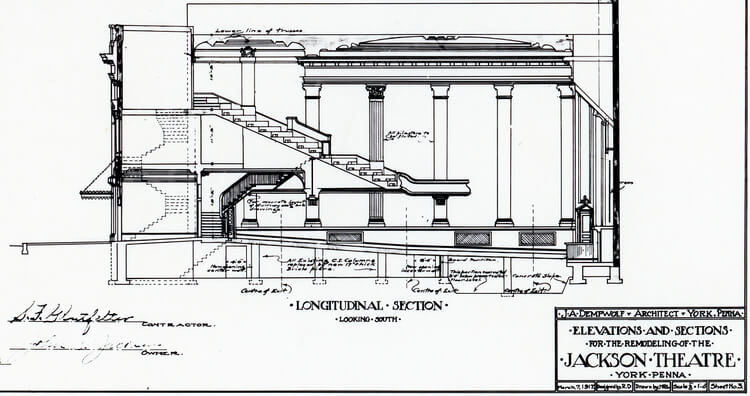 The older portion is the Italian Renaissance structure known as the Capitol Theatre and was built in 1917. Originally known as the Jackson Theatre it served as a popular source of entertainment including vaudeville, silent films to “talking pictures”. 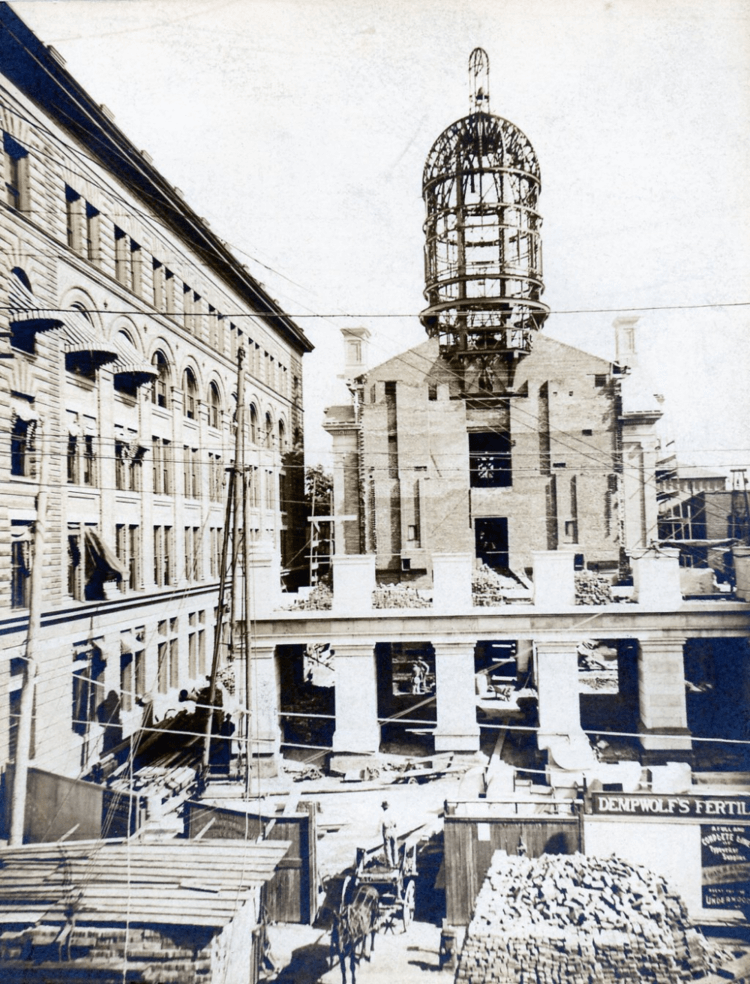 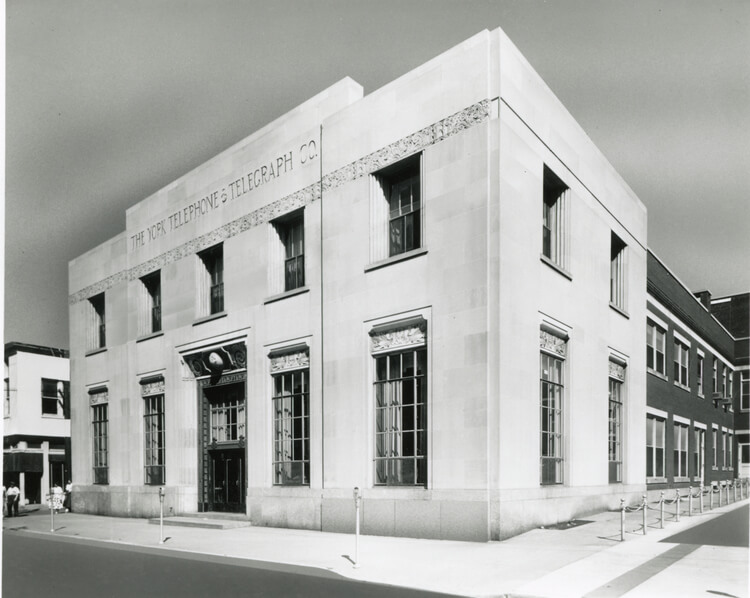 Designed by Frederick Dempwolf and built in 1929 this building is one of York’s most notable Art Deco buildings. 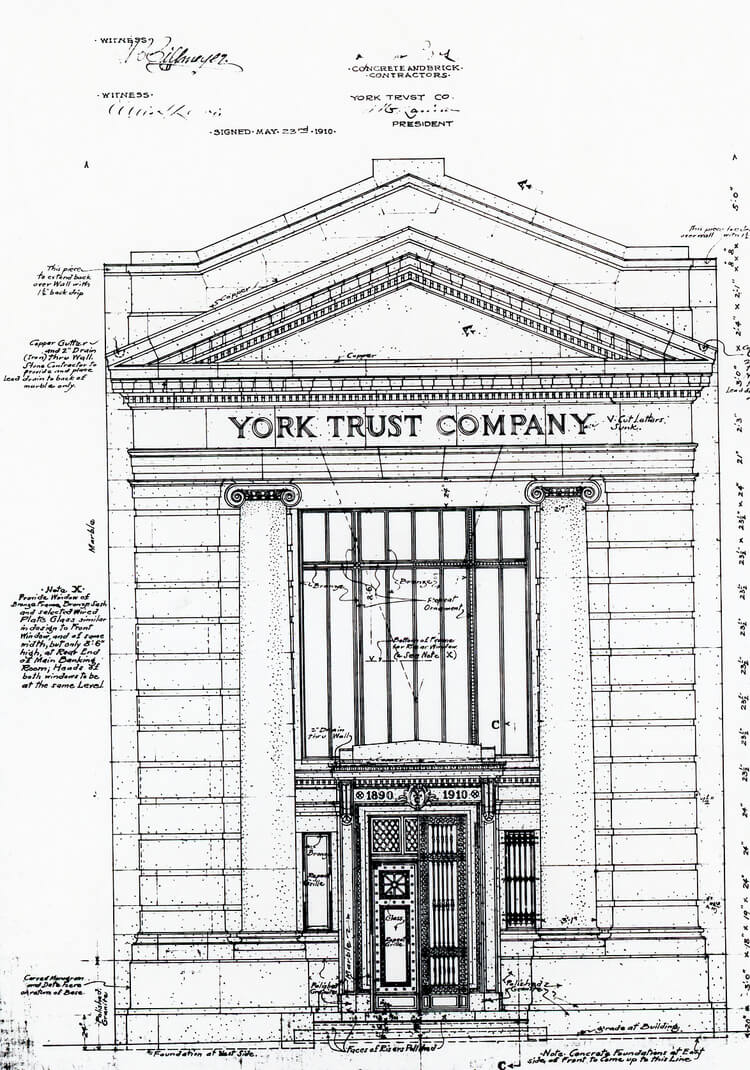 Beginning in the late 1800s, it became the York Trust Company in 1901. The building designed by Dempwolf has a Neo-classical façade that incorporates both marble and granite. 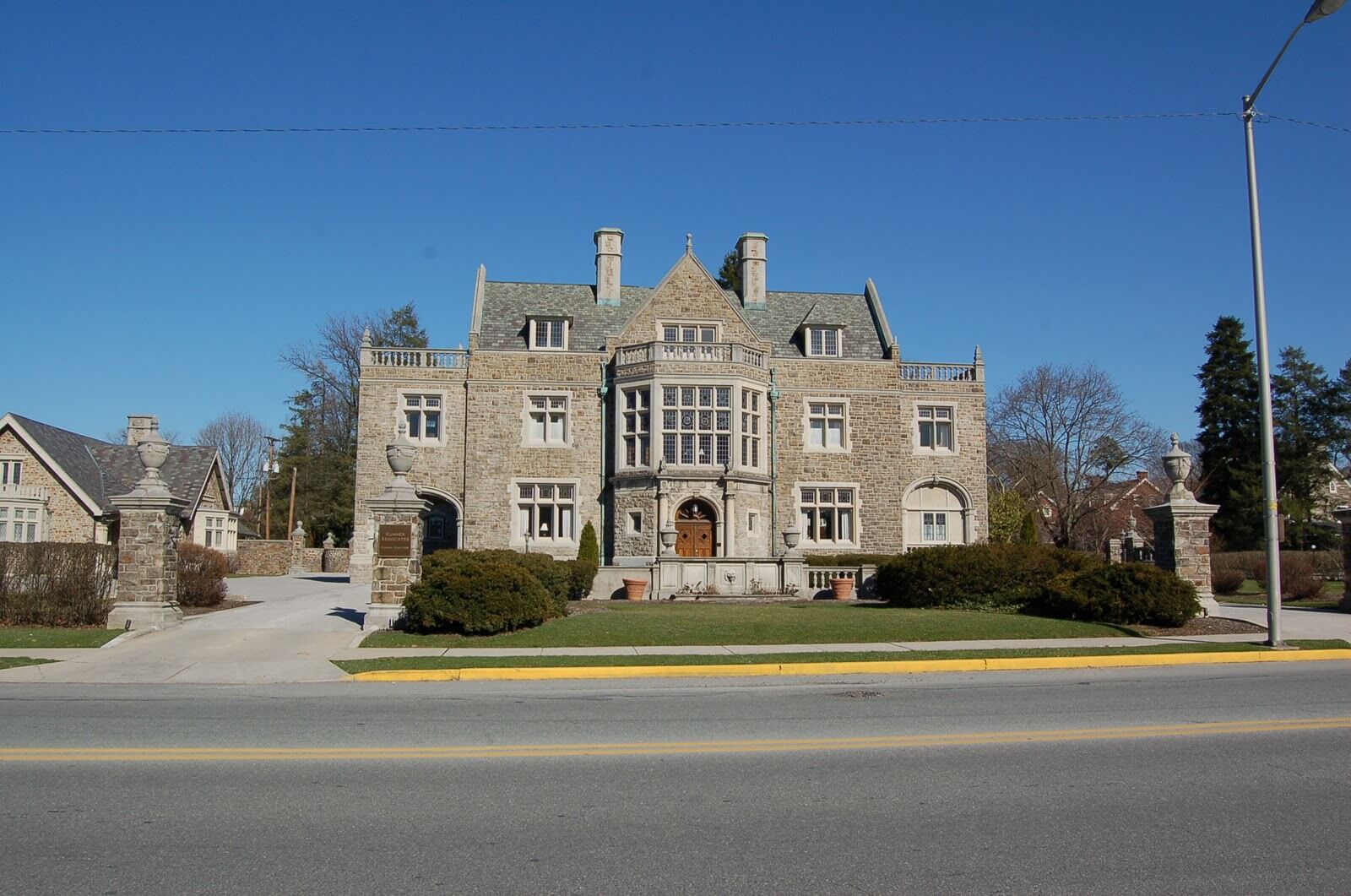 Built by J. A. Dempwolf in 1917-1918 for the Emerton Family of York, Pennsylvania this Jacobethan style Victorian mansion and grounds will invite you into a time when fortunes were made and lost in the blink of an eye. 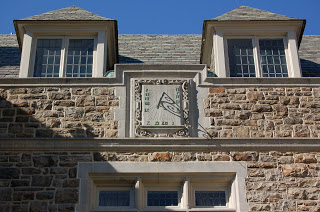 This elaborate stone beauty contains many unique features of architecture, stone masonry and wood working.  Mr. Emerton spared no expense in creating a lasting masterpiece of grandeur and beauty that has intrigued passers by along George Street for nearly a century. 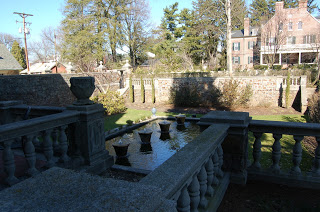 The Victorian sunken garden and patio that once entertained guests and those residing in the Hahn house during its time as a home for Ladies. 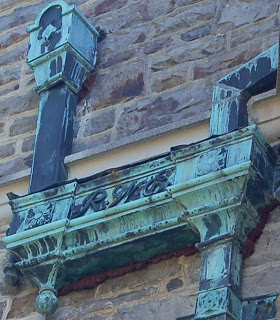 Hear the story of the Emerton family who went from employee at York Metal and Alloy to an overnight millionaire and then becoming penniless within 5 years. 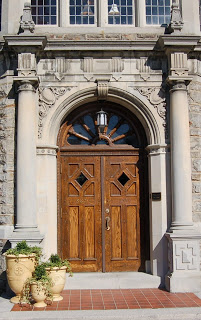 This exquisite example of the splendor of early Twentieth Century decor,  it was the most expensive building constructed to date at the time of its planning.  Costing 220,000 in 1917, today would cost close to 3.75 Million dollars. 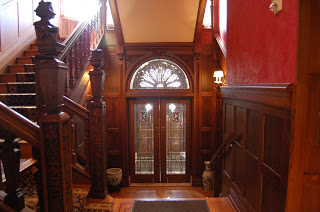 This beauty has endured through loving care by its later owners and the painstaking restoration that was necessary to bring this beauty back to its original state after a devastating fire gutted its north west corner in 2003. 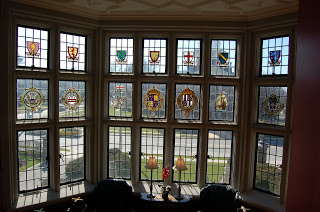 The second floor landing the stained glass windows made by Rudy Art Glass of York PA, in the crests of the Knights of the Round Table from the tales of King Arthur, one of Mr. Emerton's favorite English folklores. 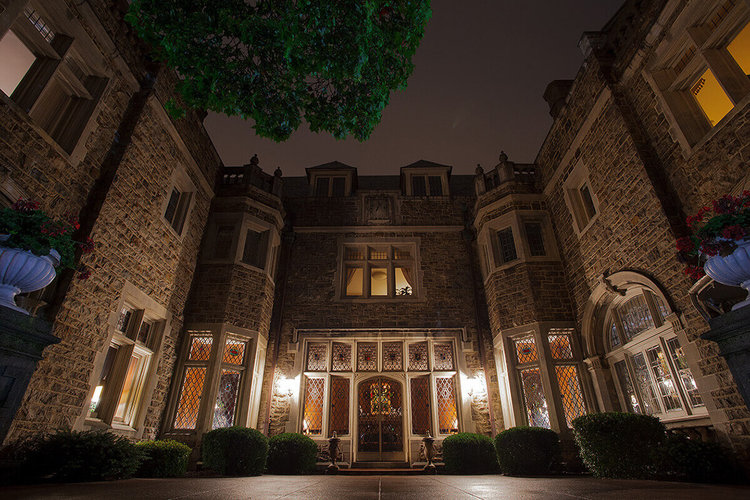 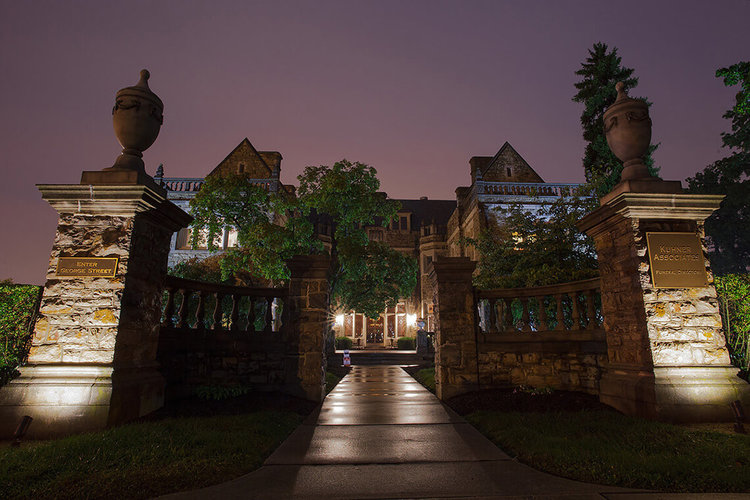 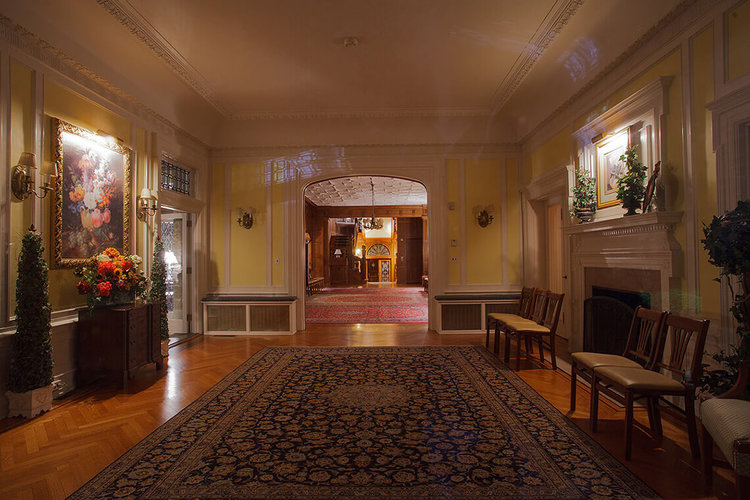 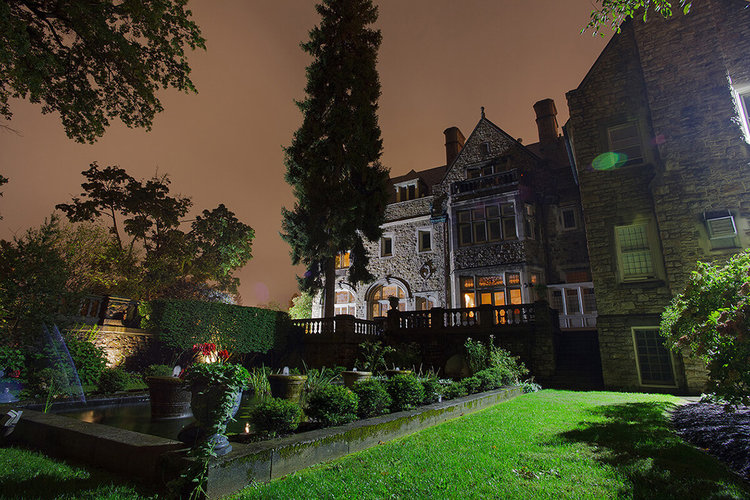 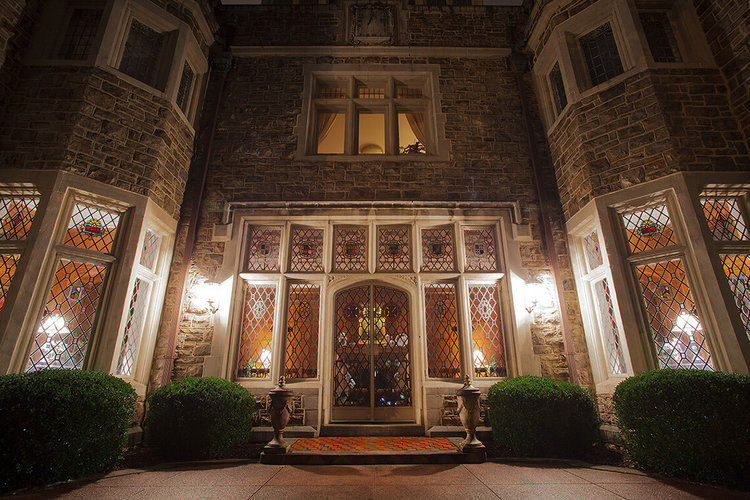 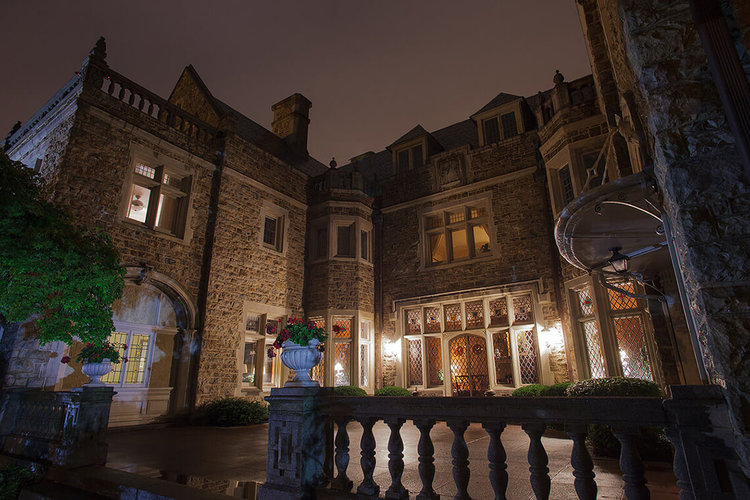 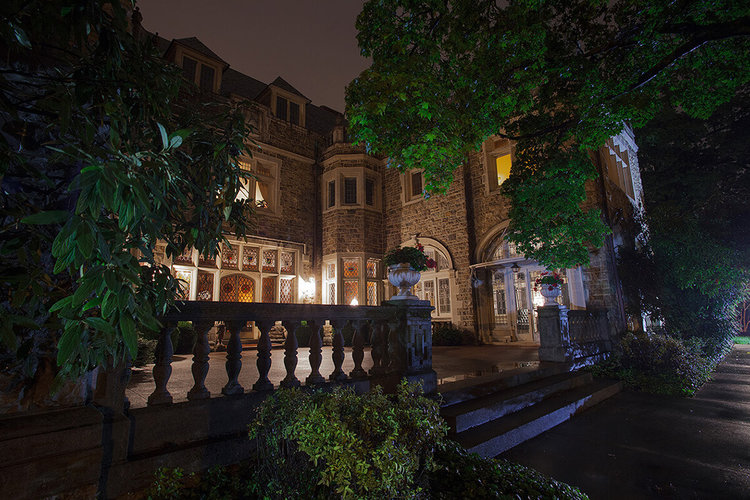 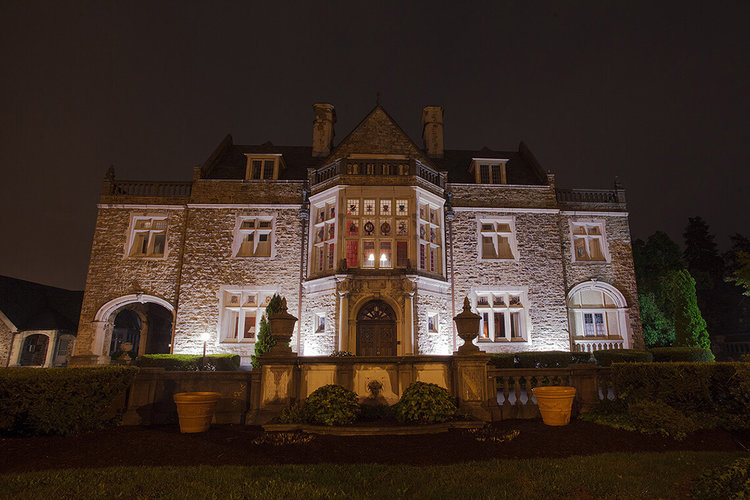 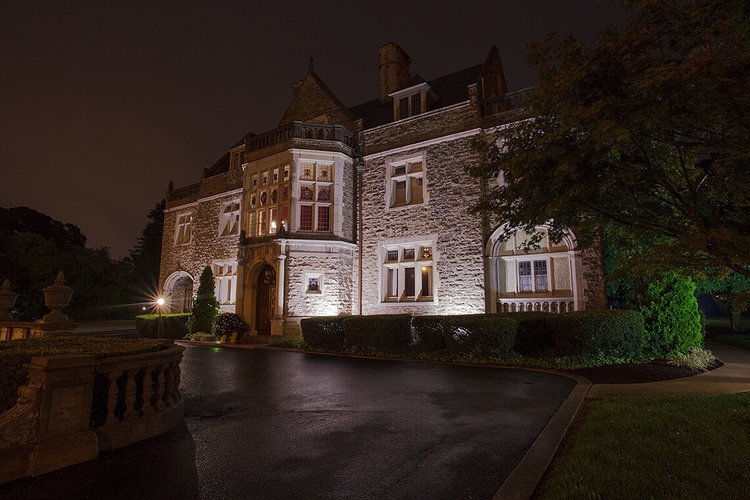 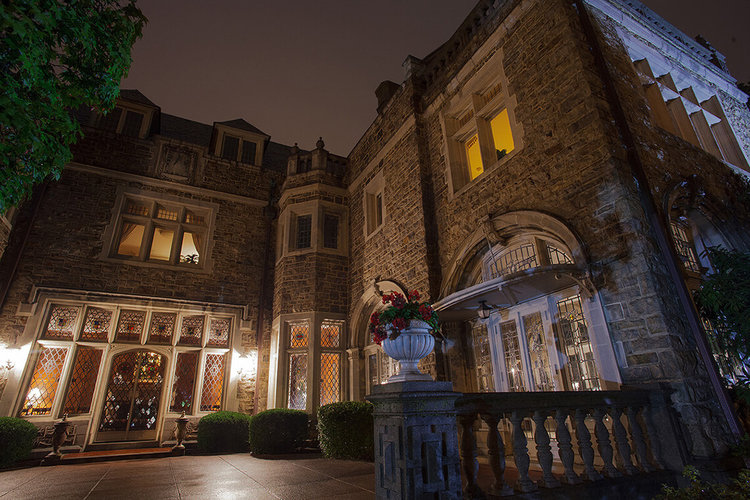 Former Hahn mansion: 'I thought it would make the most spectacular funeral home' 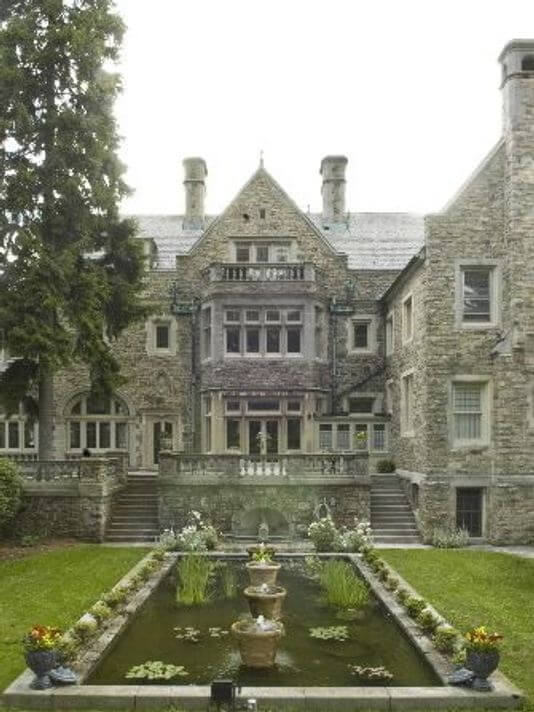 The Springdale historic district in York was listed on the National Register of Historic Places in 2001. The former Hahn Home, now Kuhner Associates funeral home, is the star among the district's 199 buildings. Architecturally, mansion is a mixture of late Gothic, early classical and Tudor styles known as Jacobethan. This view, not easily observable from the road, is the building's rear, with its water garden. Background posts: Dempwolf architects built York's skyline, Exploring ornate Springdale, sunken ballroom and all and What was famed architect J.A. Dempwolf's own house like?

Who doesn't wonder about what it would be like to own the former Hahn Home? Even its 2,700-square-foot carriage house would do.

Funeral director Al Kuhner explained recently that he drove by the former Emerton mansion for years thinking it would make a perfect funeral home. 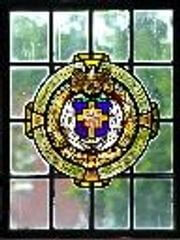 This window includes the seals of each of King Arthur's knights as well as the presidential and City of York seals. It was designed by the venerable Rudy Glass Co. of York.

After a fire badly damaged the J.A. Dempwolf-designed home, he got his opportunity, as the following story to appear in an upcoming issue of Spaces magazine suggests: 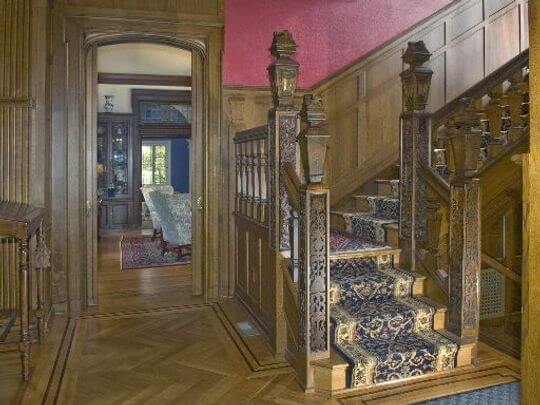 Upon entering, this grand staircase forms the home's focus point. The stained-glass windows that surround the landing are part of the home's English theme.

Albert Kuhner doesn't hesitate when asked why he purchased the 39-room mansion on the corner of Springettsbury Avenue and South George Street in York. After all, a fire had consumed more than half of the first floor of the former Hahn Home, a retirement residence for women. The second and third floors sustained heavy smoke damage in the blaze. Despite the devastation, the stately stone building was repaired. And when the board of directors of the Hahn Home decided to sell it, Kuhner seized the opportunity. "All of my professional career I have traveled by this building almost on a daily basis," Kuhner said. "And I thought it would make the most spectacular funeral home." It took only one trip through the home for Kuhner to know what he had to do. In 2004, he paid $1.15 million for the mansion, which was completed in 1918 for about $220,000. The home's stately elegance adds a touch of strength and warmth for those people experiencing a loss. Kuhner describes it as "beautiful but not opulent." He said he believes the mansion's graceful archways, carved ceilings, rich paneling, stained-glass windows and lush garden views provide the families he serves a sense of comfort and healing. The home's conservatory, with the gardens as its backdrop, is now its viewing room. The area is often incorporated into funeral services. One family recently set up a mimosa bar on the patio during services. On its exterior, the house is distinguished by its many details, such as gabled roofs and tall chimneys. Kuhner pointed out the initials of Robert Emerton, the home's original owner, are carved into a copper gutter. Emerton was an Englishman and an employee of York Metal and Alloy Co. He commissioned Dempwolf Architects to design the home for his family. At Emerton's direction, the mansion was to reflect his British taste. Stone for the house and its surrounding buildings and walls was mined from quarries in Thomasville in York County. The stone used on the front of the house was imported from the White Cliffs of Dover in Kent, England. Inside, from the mahogany-lined walls in the library to the English oak found on the walls and floors in other parts of the home, it exudes the look of an English manor house. In decorating, Kuhner tried to maintain and enhance that original appearance with deep-toned paints and wallpaper. Kuhner has turned the mansion's second floor into its funeral resource center and comfortable rooms in which post-funeral receptions or meetings could be held. He's proud of the resource center he designed, where families can choose caskets from a selection of pieces of each of 24 models attached to the walls. Beneath each example is a discreet drawer that can be opened to display interior fabrics. Next door is the cremation room where urns and other cremation-related items and mementos are displayed. Downstairs, adjacent to the conservatory, an area in which visitors gather is painted a brilliant yellow with white trim. It is the site of one of the home's six fireplaces. In all, 200 visitors can be seated in the home's main service areas. Kuhner also kept in mind that families often bring children when making arrangements or attending funerals. He included a children's area, painted brilliant blue, that is adjacent to the library. The library's books are gone, but its rich wooden cases are filled with an extensive Delftware collection. Kuhner said he believes today's use of the mansion continues its former mission to care for people. It was a mission that came about after Emerton suffered financial setbacks that forced him to turn his mansion into apartments. The Emerton family continued to live on the first floor. In 1938, the home was purchased for $143,000 from an endowment created by Anna L. Gardner, a York woman whose family also lost its fortune early in her life. Gardner stipulated in her will that a home be established for single women, older than 50, so that they could be cared for throughout the rest of their lives, regardless of finances. It also stated that the women were to be surrounded with the comfort and refinement to which they had become accustomed. The building opened in 1958 as The Hahn Home, named for Gardner's grandmother. Today, Kuhner remains in awe of its majesty and history. And, he says "one of the wonderful thrills and pleasures of owning it is sharing it with everybody." He calls the home a "York Treasure." 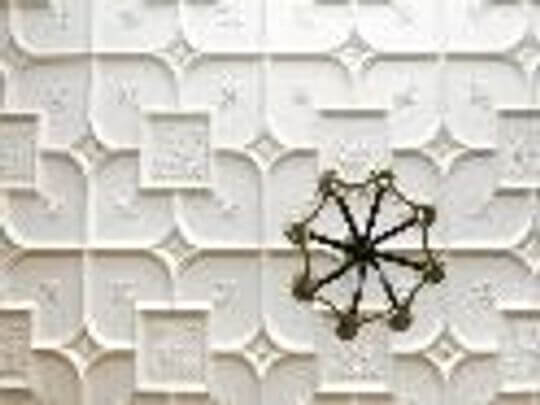 The fire damaged part of the first floor's ceiling, but renovators repaired or replicated it.